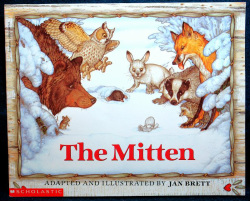 The Mitten a Ukraninan Folk Tale
by Jan Brett
As a TGC fellow, I traveled to Ukraine, a country in the infant stages of democracy since 1992 when the former USSR, of which they were a part, was dismantled.

My essential inquiry question for international travel was:

How does the culture of a nation reflect the values of its people?

My initial introduction to Ukraine was when I was a child and read the Ukrainian folktale, The Mitten. In it a grandmother knits mittens for her grandson warning him not to lose them in the snowy countryside. When he does lose one, animals of all shapes and sizes squeeze inside one at a time to find refuge there. Eventually, the mitten is stretched to splitting, spilling the animals into the snow. The boy finds the mitten, wonders what happened and returns to his waiting grandmother who is glad to see him safe and sound.

Ukraine, at the time of my childhood, was part of the Soviet Republic and the United States and the USSR were entangled in the Cold War. Although I knew that Ukraine was now a democracy, I did wonder if the Ukrainian people still identified with the values found in this story. Before traveling, I read the folktale to my sixth graders and together we made a list of what we thought Ukrainian people valued. Our list included family, hospitality, handicrafts and a love of nature.

I also wondered about the Russian/Ukrainian reverence for the Arts. As a young classical piano student I studied many Russian composers such as Tchaikovsky, Prokofiev, Stravinsky and Rimsky-Korsakov as well as classical pianists including Vladmir Horowitz who I knew was born in the Ukraine, a region of the Soviet Union. I admired the discipline of the Russian ballet and prose and poetry of Russian writers such as Chekov and Gogol. I wondered if I would see the same respect and love of the arts in Ukraine today.

The Ukrainians I met were indeed gracious and hospitable. I was continuously invited to people’s homes for dinner and conversation, and Ukrainians were curious and polite about Americans, our diversity, and our education system.  There seemed to be a strong desire to teach children to appreciate their Ukrainian heritage and to celebrate their rich family traditions. Due to the economic struggles after gaining independence, many are concerned with their children leaving Ukraine for a better life in Europe or America and feel that one of the ways to keep the youth in Ukraine is to increase the pride in their history. I learned how to cook traditional Ukrainian food such varenyky stuffed dumplings and borcht vegetable soup, to enjoy traditional instruments such as the stringed bandura and to see the beauty of the traditional art of crewel embroidery and the delicate Easter egg painting called pysankas.  http://www.travelwithachallenge.com/Ukrainian-Eggs.html

Students danced traditional dances, wearing peasant skirts and blouses and flower wreaths in their hair. They sang and recited the poetry of the revered poet, Shevchenko and gave us beautiful gifts of traditional breads, linens and paintings of Ukrainian landscapes and cottages. We found many restaurants with traditional décor, serving traditional Ukrainian foods with the staff wearing traditional clothing of the peasants and Cossacks. Love of Ukrainian traditions was everywhere.

We had the opportunity to attend a number of arts’ performances while in Ukraine including an operatic and ballet production of The Black Swan at the Kharkov Opera House http://engl.ra-production.ru/2/25.html

The audience was full of mostly middle-aged adults with some young children and families. The production was sophisticated and a bit edgy which surprised me. The cost of $25 per ticket was expensive for Ukrainians who average income is $300/month.

Students studied Russian poetry and literature and parks and streets had statues and walkways dedicated to the great writers and poets of Russia and Ukraine.  I also attended a piano concert of Chopin in a smaller venue which was sold out, and a concert of student performers which was well attended with parents and families.  There was no lack of opportunity to see music or art performances either in the schools or in Kharkov.

Even the subways paid tribute to artists, poets and musicians.

Interestingly I noticed the graffiti that surrounded some of the parks and open spaces and in particular one artist, Kolba fascinated me. His work was political in nature and symbolized the Ukrainian struggle with democracy.

The Ukrainian appreciation of nature was visible throughout the places we visited. Parks, farmland, and acres of forests were seen everywhere, and many Ukrainians still vacation in dachas (country houses) that are family owned. People enjoyed walking in the parks or hanging out on the benches.

The educators we met were passionate about their work and interested in the focus on creativity in our American schools. They were eager to make connections with our students and to communicate with our classes in the future. The focus on the arts and literature was apparent in most classes and student work lined the hallways and walls.

As I reflect on my two weeks spent in Ukraine I want to remember passionately the Ukrainians’ love and respect for the Arts and Humanities. It sends a strong message to me that we cannot forget their importance as we focus on STEM and a push for common core standards in non-fiction texts. We must find room for both as the humanities build an important foundation for living life with appreciation and empathy. The Ukrainian focus on their music, poetry, literature, traditions and folk arts is admirable and necessary.

I am happy that I have connected with Ukrainian teachers via Edmodo and we are planning to talk and develop collaborative projects with our students. We recently participated in International Dot Day on Sept 15, 2013 and shared video and artwork from our students via the internet.

How will Ukrainians use technology to break the barriers that now restrict them with regards to innovation, and business opportunities?

Politically, will the Ukrainians decide to follow the democratic ideals that they see in the European Union or revert back to the communist ideals of Russia? They appear extremely unstable at this time. I am watching with interest and concern now that I have teachers whom I call friends from Ukraine.